Whether you are a Monarchist or not, you will probably be impressed by the Facebook timeline that follows the life of Her Majesty Queen Elisabeth II and The British Monarchy.

It’s not just that the Monarchy wields a lot of power, but it seems the Queen’s digital servants have a great handle on how to make the most of Facebook’s timeline features. 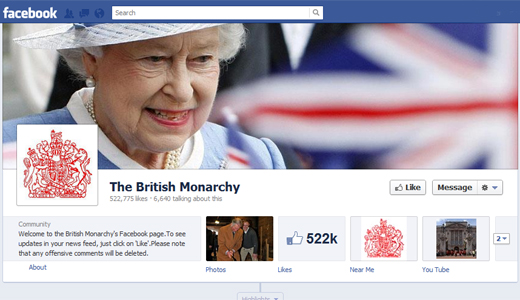 From the bottom up, the timeline opens on Feb 6, 1952. A black and white Press Association photo starts the story, “Dressed in black, Her Majesty sets foot on British soil for the first time as Queen following the death of her father, King George VI and her resulting Accession. Her Majesty was in Kenya when she learnt of her father’s death.”

From there you an follow the life of the Monarch through every decade up to the present day.

It’s an extraordinarily lively way to present the history of a Royal figure. Not only are the landmark births, weddings and funerals listed, you can also find other aspects of life in the UK. Fashion, technology and social history all become apparent while following this particular timeline. I was particularly fond of the photo of the Queen making the first subscriber trunk call in the UK in 1958.

Just when you thought you had a handle on using Facebook for your business they introduce a change. Last week they introduced the Timeline feature for brand pages. The good news is you have some time. You can change your brand page to the new format when you are ready, it just has to be done by March 31, 2012

Many businesses don’t understand how this affects them, so I’m here to share with you an overview of the changes that will affect your brand page. It is clear in reviewing the changes that  Facebook has implemented they are stressing the importance of engagement with your page followers. You have to remember that just like your business, Facebook has an obligation to their users as well. The obligation Facebook has is to provide users with information that is relevant and interesting. To the users of Facebook this information centers around who they are connected to – friends, family and associates.

Learn more and take time to understand the new Facebook changes to brand pages and how it impacts your businesses.