What do the NBA Playoffs look like through the eyes of social and factored in social media presences? Well, it would have LeBron James of the Miami Heat winning his first finals MVP. theScore has run some interesting analytics with our old friends at Sysomos and found that James beats Kobe Bryant, placing the Los Angeles Lakers into second spot. 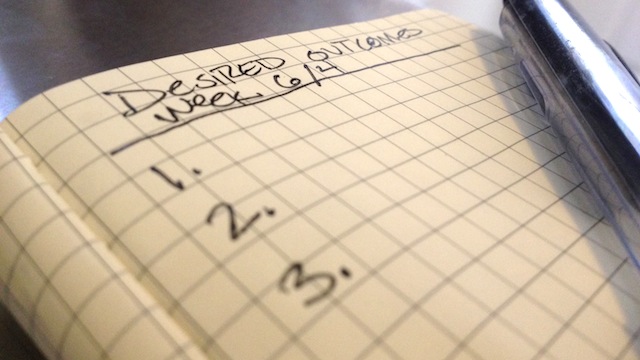 Keeping a to-do list or project list is a great way to get a grasp on your day, but if you’re looking for way to better define where you’ll end up app developer Dave Lee suggests starting your week with a list of three desired outcomes and working from there.

The idea is that people in creative jobs might have a hard time working within a productivity system, but defining a list of desired outcomes creates a weekly goal while still maintaining a sense of order. Lee’s task system has ten parts, but two relate to how he breaks down a week and a day:

2. I choose my three most desired outcomes for that week. This gives me a goal and vision for my week.

3. I choose my three most desired outcomes for the day at the beginning of the day. All three outcomes should be related to your focus of the day.

For creative types it’s an interesting way to formulate a plan to work toward a goal that you can break down into smaller parts if you want. Head over to Lee’s blog to see the full breakdown of his system.

By 2015, India will have more Facebook (FB) users than any other country on Earth—tilting the social networking action away from the West and toward one of the fastest-growing emerging markets on the planet.

The number of Indian Facebook users is growing 22 percent every six months, meaning that India will edge out the U.S. toward the end of 2014, when both countries are expected to have 170 million to 175 million members.

Also, Facebook has aggressively targeted younger people. Says Cara Pring, a social media blogger in Sydney: “While it’s common to see a slight overrepresentation of younger age groups (i.e., 18 to 34) on social media channels, in India this group represents a huge 76 percent of all Facebook users. It’s clear that this age group is driving the social media revolution within the country.”

In 2010, Facebook opened an office in Hyderabad, India’s high-tech hub. Naidu says this has helped the company market to advertisers and forge agreements with cell-phone service providers—important in a country where most Facebook users log on via hand-held devices.